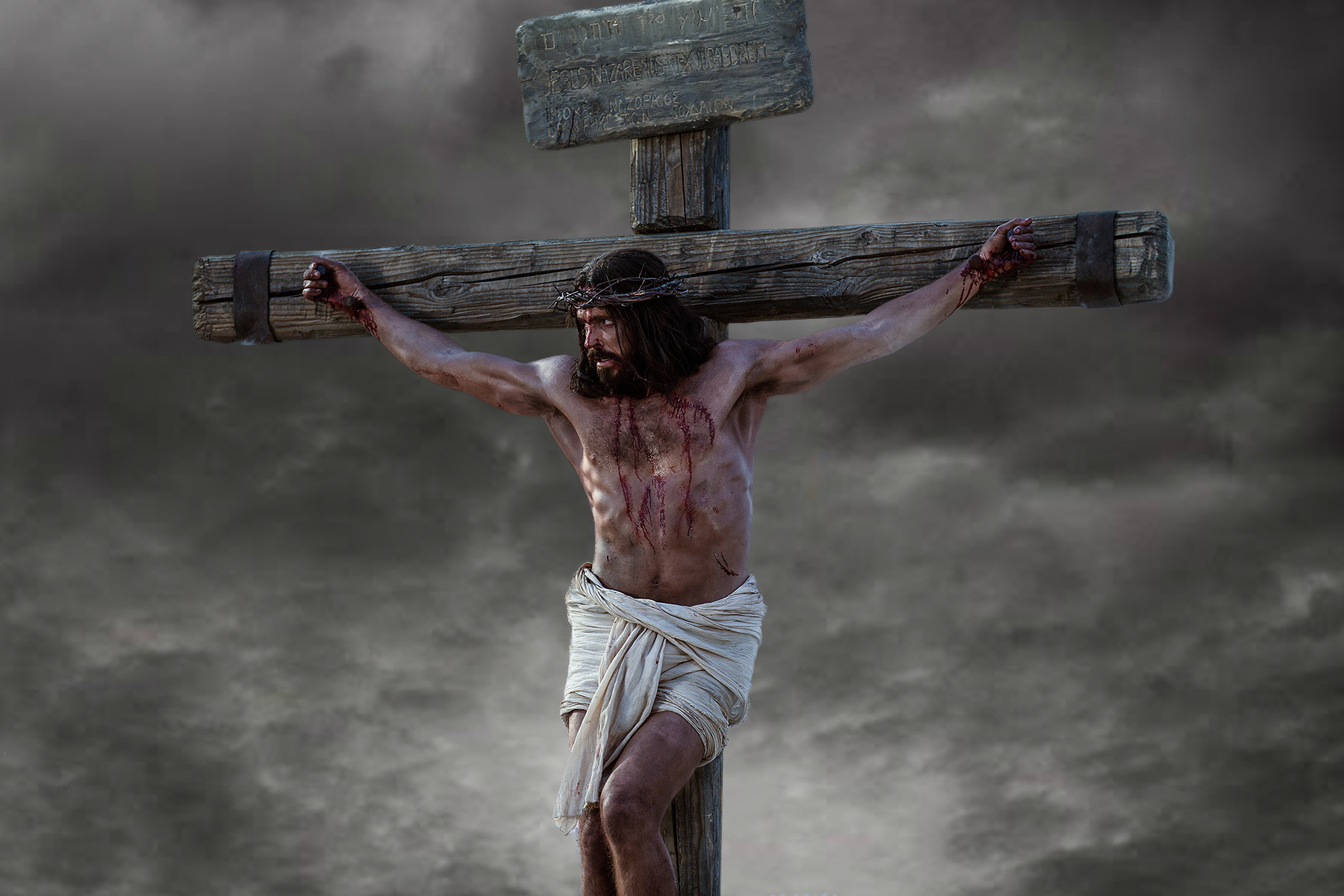 Right from the beginning when God himself clothed Adam and Eve with animal’s skin after they ate of the fruit they were forbidden to eat, it became obvious that animal’s blood was always needed for atonement. (Gen 3:20-21)
When the Children of Israel were to leave Egypt, God also commanded them to kill a lamb, of course a lamb was prescribed for a house, saying that the blood be used on the two side posts and the upper door post of their houses to avert death that was to come upon all first born of Egypt. (Ex 12:3-4).

In Leviticus, God gave the commandment to the children of Israel to observe a process of atonement for sin by way of offering specified animals like lambs, goats, pigeons, turtle doves etc. According to the nature of sin, and the ability of the person involved.(Lev 5:5-9).

But all these were a shadow of what was to come. Jesus is the substance. He died for the purpose of being a substitute for all previous atonements done through animal sacrifices. He was crucified on the cross, and his blood drained through a process of a crown of thorns on his head; long nails piercing his hands and feet; a sharp spear was thrust at his ribs, including numerous numbers of stripes on his bare skin. In truth, there can be no forgiveness of sins without the shedding of the blood of Jesus. This is universal since the blood is able to watch all sins away irrespective of tribe, race, colour etc. However, it is only those that walk in the light of the truth of the work done by Jesus and are able to embrace the Sacrifice that can benefit from it. (1 John 1:7,9).

This is the redemption plan of God backdated to Genesis, Exodus, Leviticus, Number and Deuteronomy. This plan was executed to remove the death sentence hanging on the neck of every soul on planet earth. It is meant to destroy every negative oath taken in Ignorance that has put many in perpetual bondage. The blood atones for every case, standing as an advocate so that in any situation where you should be found guilty, the blood quickly submits evidence to acquit you because no one is punished twice for an offence. Jesus has been punished for all believers. He died for you. His death and the bloodshed took away our sicknesses and gave us health and sound mind instead of ailments. It is instructive to know that the blood also brought the peace of God into our lives, making us be at peace with God.

It is a blood covenant that is imposed on the old one of the animal’s blood. It is a superior covenant. (Heb 8:6-13). But now hath he obtained a more excellent ministry, by how much also he is the mediator of a better covenant, which was established upon better promises.
Make up your mind today, and you will be a partaker of the benefits of the blood.

David, the greatest king in Israel spoke on the subject of mercy, having enjoyed the dividend of mercy after committing a very grievous sin against God and man. (Psalms 51:1-3). Have mercy upon me, O God, according to thy lovingkindness; according to unto the multitude of thy tender mercies blot out my transgressions.

Wash me thoroughly from mine iniquity, and cleanse me from my sin for I acknowledge my transgressions and my sin is ever before me.
To receive mercy, the sinner must acknowledge his sins. (Prov 16:6) says “By mercy and truth iniquity is purged…” It is a fact that whenever God wants to show mercy, he also expects the recipient of the mercy to confess certain truths about himself. Mercy is universal, while the truth is specified. It was the truth that the criminal crucified with Jesus declared that extended the arm of mercy to him.
(LK 23:39-43).
There is no sin God cannot forgive. He wants you to own up – to tell him that you are a sinner and that you are willing to come out of your sins. We are not talking about “the general sins of man” God wants you to be very specific. He wants you to point out the very sin that you know about yourself – that very sin that has become a part of you. God’s mercy is inexhaustible, but God will only
offer it when a sinner comes to him repentantly. Are you ready to confess your sin to the Lord? Are you ready to give it up? If you are ready, the lord is ready. Even now he will forgive you. He has forgiven greater sins. He is with you right here. Just speak these words in your
heart: “Lord Jesus, have mercy on me. I am a sinner…… (Mention your sins to him alone). But I have decided today not to continue in sin. Forgive me, Lord. Write my name in the book of life. Give me the grace to serve you till the end. Thank you, father, for saving me. In Jesus name, I pray, (Amen).

You are now a new creature. All accusations are nailed to the cross. Angels are now rejoicing in heaven because of you. If any person’s property is in your possession which does not belong to you, make haste and return it to the rightful owner without delay. Do it without fear. If it appears difficult to consult your pastor. From now, God’s mercy will speak for you. Remember that you are no longer the ordinary person you used to be. Be ready to speak about Jesus. And do it everywhere and to everybody. Read and study the Bible every day. Ask
questions where things are not clear. Avoid old friends that are not believers like you. Associate with a ministry where the undiluted word of God is given. Learn not to be alone, but be in the company of sound believers. Make fellowship with brethren a habit.
.

NO SHORT CUT TO HEAVEN

However, if the blind lead the blind, both must fall into the pit. If there is anything God abhors and so seriously detest, it is when he sees the people under his umbrella behaving lawlessly. When God asked Noah to build an Ark, he gave him a description of the measurement. God has a standard for everything he ordains. His commandments are usually definite and are void of confusion. Right from the Old Testament to
the New Testament, he remained the same. Grace does not eliminate orderliness, neither are God’s commandments ambiguous. And they are not subject to private interpretations.

See how the Lord spelt out what the disciples were to do and what they were not to do when he sent them out to preach the gospel. Matthew chapter 10:5-42. These twelve disciples Jesus sent forth, and commanded them; go not into the way of the Gentiles, and into any city of the Samaritans Enter ye not: But go rather to the lost sheep of the house of Israel. And as ye go, preach saying the kingdom of heaven is at hand.
Heal the sick, cleanse the lepers, raise the dead, cast out devils: Freely ye have received, freely give…. All believers have this mandate to preach the gospel of Christ. But it is normal for believers to think that they can behave like the people of the world and still
be Christians, and still an aberration for the believer to continue in such disorder without remorse. In the real sense, a true believer should not talk the way other people of the world talk. He should not even associate the way they do. His dress code should be unique. Everything about him should be distinct from that of the people of the world. But today, there is confusion everywhere. Don’t even border
to ask in your mind if there is a recommended dress code for those going to heaven because if anyone has the spirit of God in him, the same spirit will bear him witness in all things. God is angry with such believers that have not separated themselves from the world. Their hearts are still in the world. But there is an urgent call, a call for a change of heart. Once the heart is turned to such level of consecration the entire
body system will response to corresponding with the dictates of the heart God is pleading with you to return to him. He will pardon you. He will not even remember what you did. His mercy is abundant, and it is available now.

ASKING TO RECEIVE LUKE 15:11-32
A survey of the story of the prodigal son reveals a very striking lesson that is often neglected by many people. You may have no real reason to be angry like the elder brother of the prodigal son if you refuse to ask for your share of the heavenly riches.
Now his elder son was in the fields and as he came and drew nigh to the
house, he heard music and dancing.

And he called one of the servants and asked him what these things meant. And he said unto him, thy brother is come, and thy father hath killed the fatted calf because he hath received him safe and sound. And he was angry and would not go in: therefore came his father out, and entreated him.

When the elder son came, he stood afar from the house. Why did he stand outside to make an enquiry about what was going on Why did he not go directly to his own father for such enquiry? Even if he felt slighted as the elder son that ought to be aware aforetime of the merriment in the home, it was still necessary for him to confront his own father on the matter. But the simple truth is that once one errs on such matters the one would not be able to speak directly to his heavenly father; he will rather stand afar peeping. His father’s response was very instructive: And he answering said to his father, lo, these many years do I serve thee, neither transgressed I at any time thy commandment: and yet thou never gavest me a kid, that I might make merry with my friends: But as soon as this thy son was come, which hath devoured thy living with harlots, thou hast killed for him the fatted calf And he said unto him, Son, thou art ever with me, and all that I have is thine.

The elder son refused to take what rightly belongs to him. One could be serving God faithfully for so long without a single testimony of God’s goodness in his life; such a one may be very holy without blemish, but nothing physical to show for it. Rather than cast an evil eye of envy on other prospering brethren, learn to ask today, and it shall be given you.

Salvation by grace is God’s Grace through which one receives forgiveness of sins and all sins remitted. This is a product of Faith in the only begotten son of God. The benefit of salvation is highlighted in the depraved nature of man who was subject to God’s wrath and condemnation.